Miso Soup bursting with chicken, noodles and shiitake mushrooms swimming in a steaming hot, savory, salty broth is a meal-in-one all made in ONE POT in 30 Minutes!

This Miso Soup Recipe with Chicken, Noodles and Vegetables goes beyond basic Japanese Miso Soup to create a hearty, comforting, satisfying dinner.  The warm broth is both soothing and light while packed with multi-dimensional miso flavor.  The chicken, noodles and shiitake mushrooms all cook in one pot for an easy dinner with even easier cleanup! 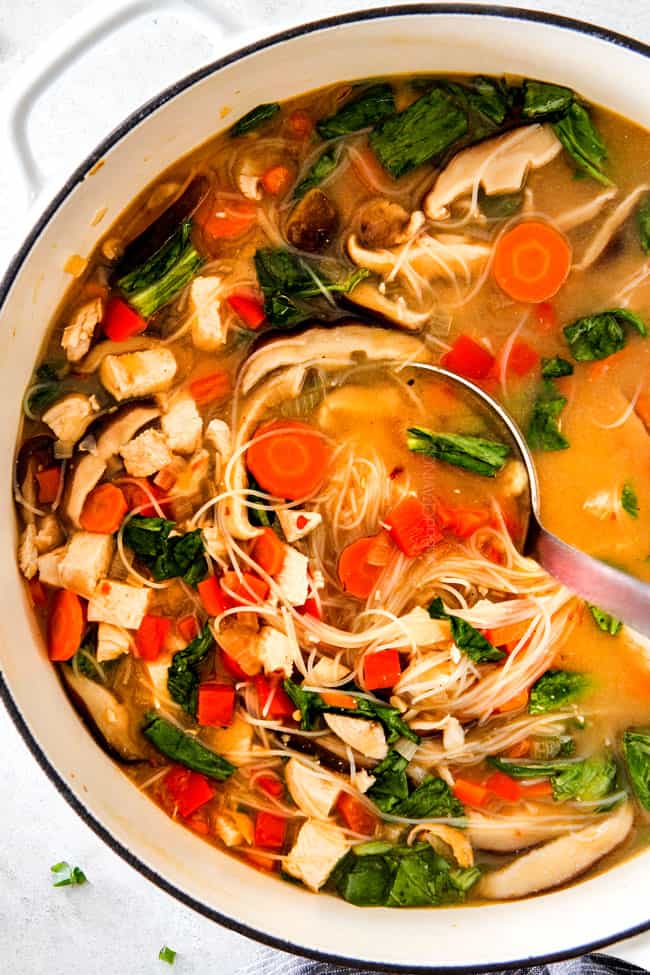 Ever since the overwhelming reception of my Laksa and One Pot Thai Chicken Noodle Soup, I’ve been eager to share this this Chicken Noodle Miso Soup.  I love Miso Soup but wanted to create a Miso Soup recipe that was a meal-in-one – not just a teaser appetizer soup that requires a full meal afterwards to fill you up.   I also wanted to create a Miso Soup recipe that uses easier to find ingredients than your traditional Japanese Miso Soup but still tastes every bit as authentic.  Mission accomplished. 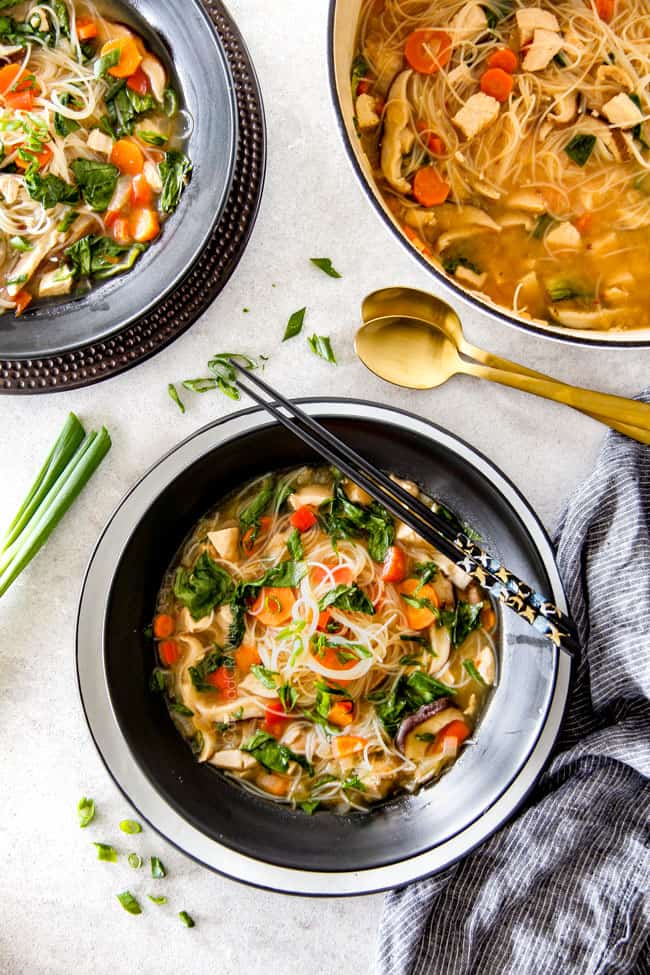 What is In Miso Soup?

If you have ever been to a Japanese restaurant you have probably tasted the comforting, warm, savory soup known as Miso Soup.  According our pal, Wikipedia, more than 80% of Japan’s total annual production of miso goes into miso soup, and 75% of all Japanese consume miso soup at least once a day!

Traditional  Miso Soup recipes consist of Miso Paste, (more on that in a minute), dashi (a Japanese soup stock typically made from bonito flakes (smoked dried fish) and seaweed (kombu)), and tofu, but the variations are endless, depending on the region, season and preference as you can see in my creative spin of Miso Soup with Chicken, Noodles and Veggies. 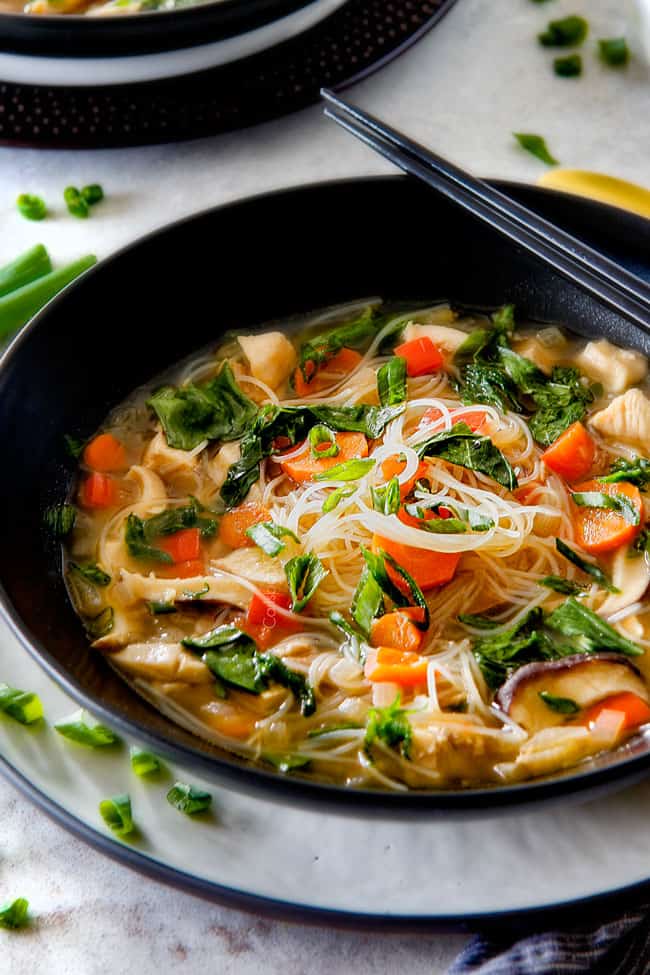 What is Miso Paste?

Even though I have enjoyed the soothing sensation of warm almost hot miso broth coating the back of my throat on numerous occasions, I honestly had no idea what was in Miso Soup until recently, all I knew was it has miso paste.  But what exactly is miso paste?   Miso paste is created from a mixture of soybeans, sea salt and rice koji and then fermented.  Don’t let the word “fermented” scare you.  It simply means that enzyme rich compounds are created which break down the mixture, to create the savory, salty, umami-rich taste.

There are many different variations of Miso Paste from white to yellow, to red to brown.  The general rule of thumb is darker miso boasts a stronger, deeper flavor than lighter miso because it has been aged for a longer period of time.  Red Miso paste, for example, has a more pronounced flavor than White Miso Paste.  For our purposes, we are going to use White Miso Paste. 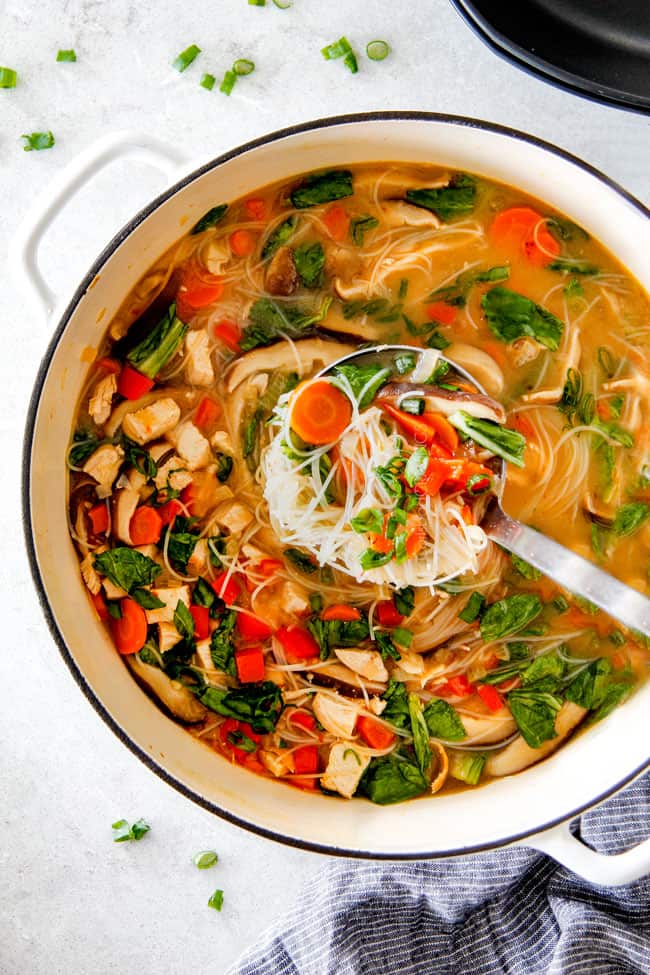 Where to Buy Miso?

Nearly all Asian markets carry Miso Paste.  If your grocery store carries it, it will be found in the refrigerated section.  You might want to call ahead though to double check so you don’t waste your time looking for it if its not there.  And there is my favorite place to purchase it – Amazon. 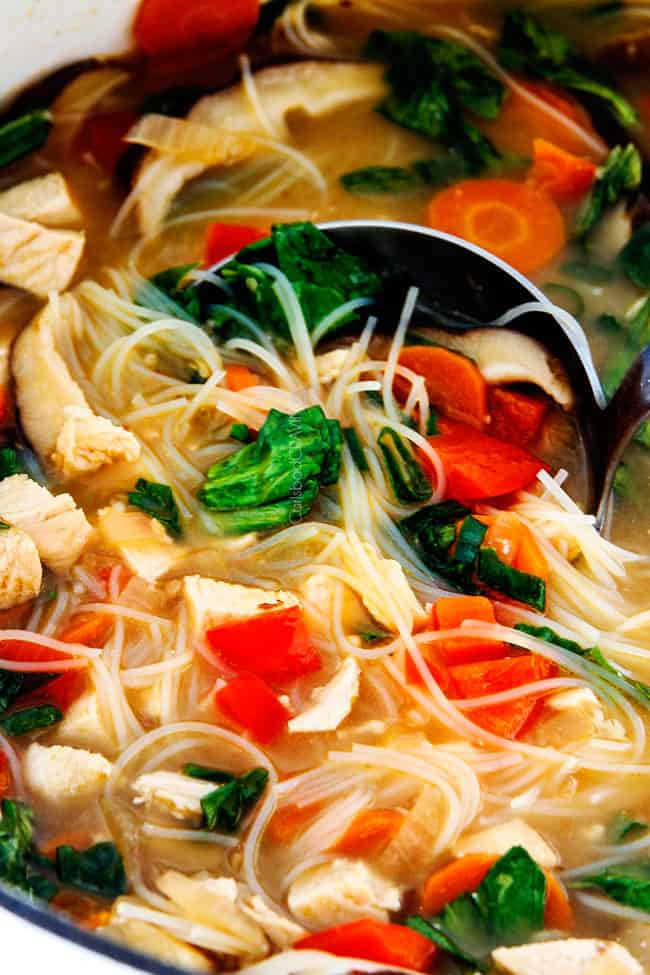 How do you make Miso Soup?

1. Sear Chicken.  You don’t have to use chicken, but if you are looking for a punch of protein, it is absolutely delicious! We start by first slicing our chicken breasts through the equator to create thin fillets.  This will ensure they cook evenly and in the same amount of time as the rest of our ingredients.  Next, brown both sides of your chicken, but don’t cook through, because protein color = flavor.  Next, we are going to remove our chicken but add it back in later to simmer in our spiced broth.

I love cooking chicken in soups this way because you don’t have to chop or dice raw chicken and it remains incredibly juicy and tender instead of becoming overcooked and drying out because the pieces are too small.  If do you happen to have leftover rotisserie chicken on hand,  this soup is an excellent to use it in – just throw it in at the very end.

2. Saute Veggies.   We saute our onions and carrots for 3 minutes then add our mushrooms, ginger and garlic and sauté for just one minute.  This ensures our mushrooms, garlic and ginger don’t get overcooked but still unlock their flavor.

Shitake mushrooms boast a rich texture and smoky flavor, but if they are hard to come by or too expensive, then you may substitute them with cremini mushrooms or another variety.   If you are substituting mushrooms, then I would add them with the bell peppers later on the in the instructions because they are far less meaty and will cooker very quickly. 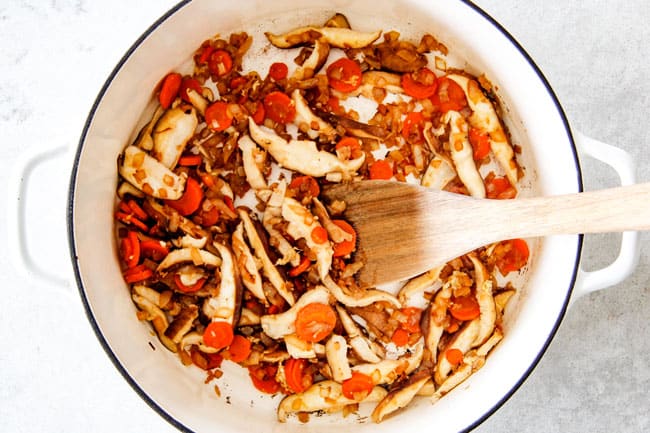 3. Add broth.  We are not using Dashi in our Miso Soup recipe so I’ve created a delectable savory broth with the use of chicken broth and splashes of soy sauce, rice vinegar, Japanese rice wine and chili paste.  We add our chicken back to the broth then bring it to a gentle simmer for approximately 10 minutes before removing the chicken.  If you have extra thin chicken fillets, you will want to take them out of the simmering broth sooner so they don’t overcook.

What is rice wine and where can I buy it?   Rice wine should become a pantry staple if you do much Asian cooking because it is used in MANY of my recipes, such as my Beef and Broccoli, General Tso’s Chicken, Cashew Chicken, Mongolian Beef and on and on. Rice wine is NOT rice vinegar – DO NOT switch them out.  Rice wine adds a sweetness and depth of flavor while Rice vinegar, on the other hand will add an acidic flavor.

I use “Kikkoman Aji-Mirin: Sweet Cooking Rice Seasoning” which is commonly found in the Asian section of most grocery stores or you can Amazon it.  I highly suggest you google image before you head off to the grocery store so you know exactly what you are looking for.  The best substitute for rice wine is pale dry sherry.

4. Mix Miso Separately.  Before we add our noodles, we add our miso paste to a medium bowl then ladle in some hot broth then whisk to combine.  You do NOT want to simmer or boil your miso soup once it has the miso paste combined or it will become gritty.  That is why we whisk to dissolve it in a separate bowl and set it aside to add later.

5. Add Rice Noodles.  Next, we add rice noodles and bell peppers to the pot and simmer 2 minutes then turn off heat (this is also where you would add your mushrooms if you are not using Shitake). I LOVE the texture of rice noodles (sometimes called rice sticks).  They are made from rice flour and maintain their perfectly al dente texture for days, if not overcooked initially, making the soup perfect leftovers.  If you have another favorite noodle, feel free to substitute them, but I would cook them according to package directions before adding to the soup. 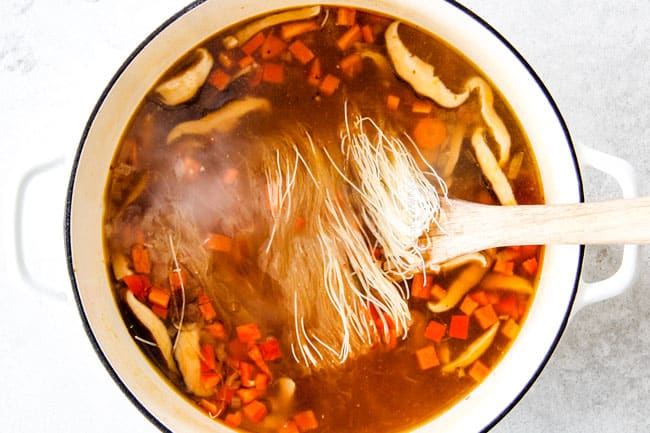 6. Add everything else.  Add bok choy (you may substitute spinach), chicken and entire miso mixture back to the pot and stir to combine. Cover pot just until noodles are al dente and bok choy is wilted, 1-2 minutes. 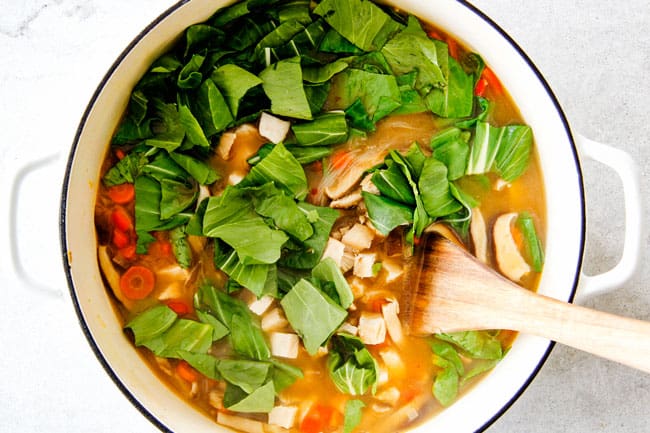 7. EAT!  I hope you love this Miso Soup recipe just as much as us and that it satisfies all those Miso Soup cravings!

Looking for more One Pot Soups? 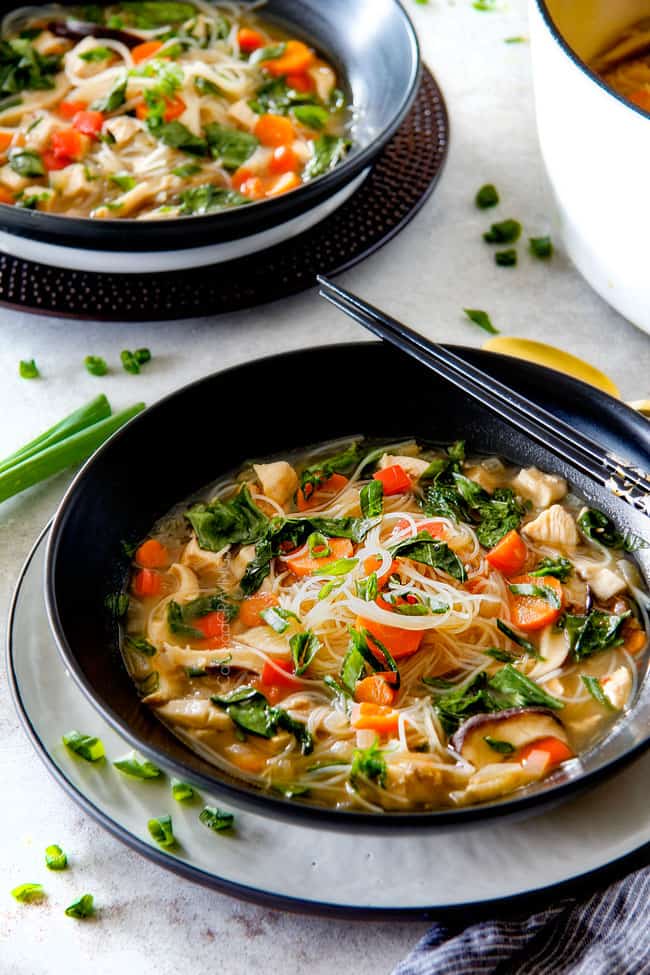 Pin it to your SOUP, ASIAN, CHICKEN,  ONE POT or 30 Minute Meals Board to save for later! 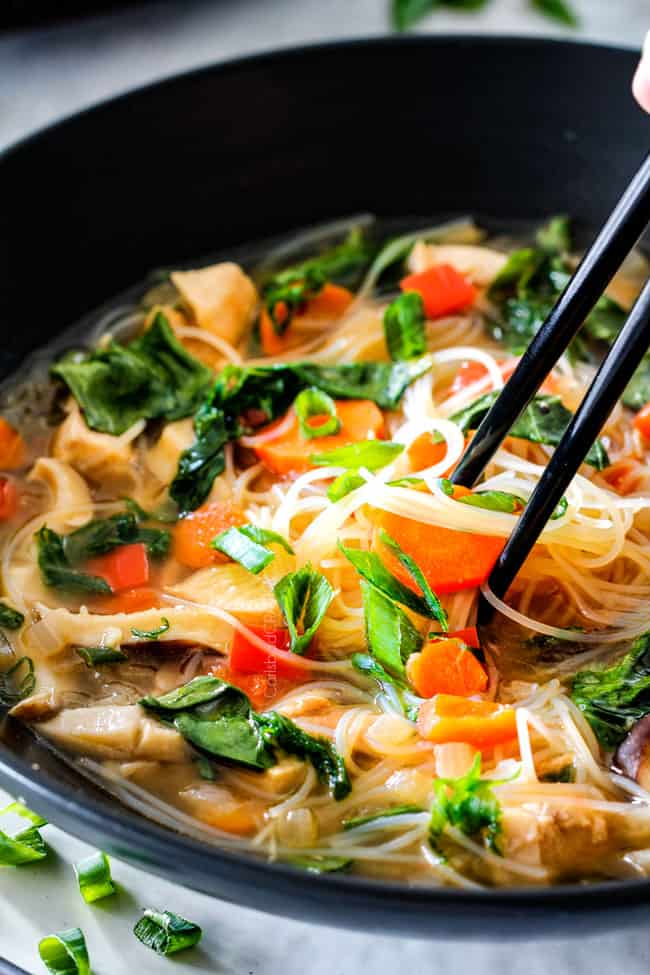 Print Recipe
Miso Soup Recipe (with Chicken, Noodles, Shiitake Mushrooms)
Miso Soup bursting with chicken, noodles and vegetables swimming in a steaming hot, savory, salty broth is a meal-in-one all made in ONE POT in 30 Minutes! It's a hearty, comforting, satisfying dinner packed with multi-dimensional miso flavor.  The chicken, noodles and vegetables all cook in one pot for an easy dinner with even easier cleanup! 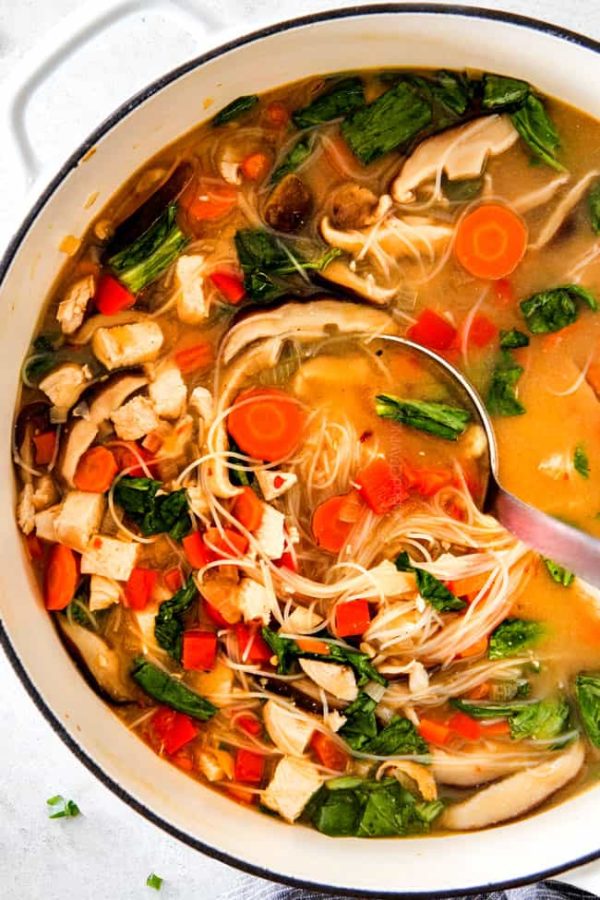 *You may substitute with cremini mushrooms but I would add them with the bell peppers because they are far less meaty and will cook very quickly.
**These rice noodles are very long so I cut them up a little before I add them to the soup. This can be messy though, so you can also use kitchen shears and cut them once they are cooked in the soup if you desire. You can also substitute your favorite Japanese noodles but I would cook them according to package directions and then add them to the soup.
***White Miso Paste can sometimes be found in the refrigerated section of your grocery store or should be easy found at your Asian market. You can also Amazon it.
****You may substitute spinach or kale. 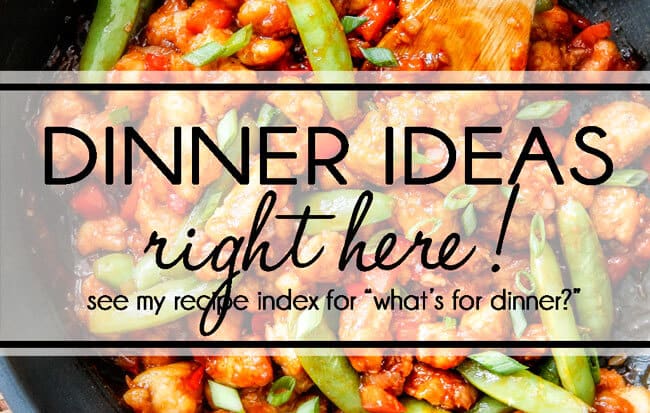 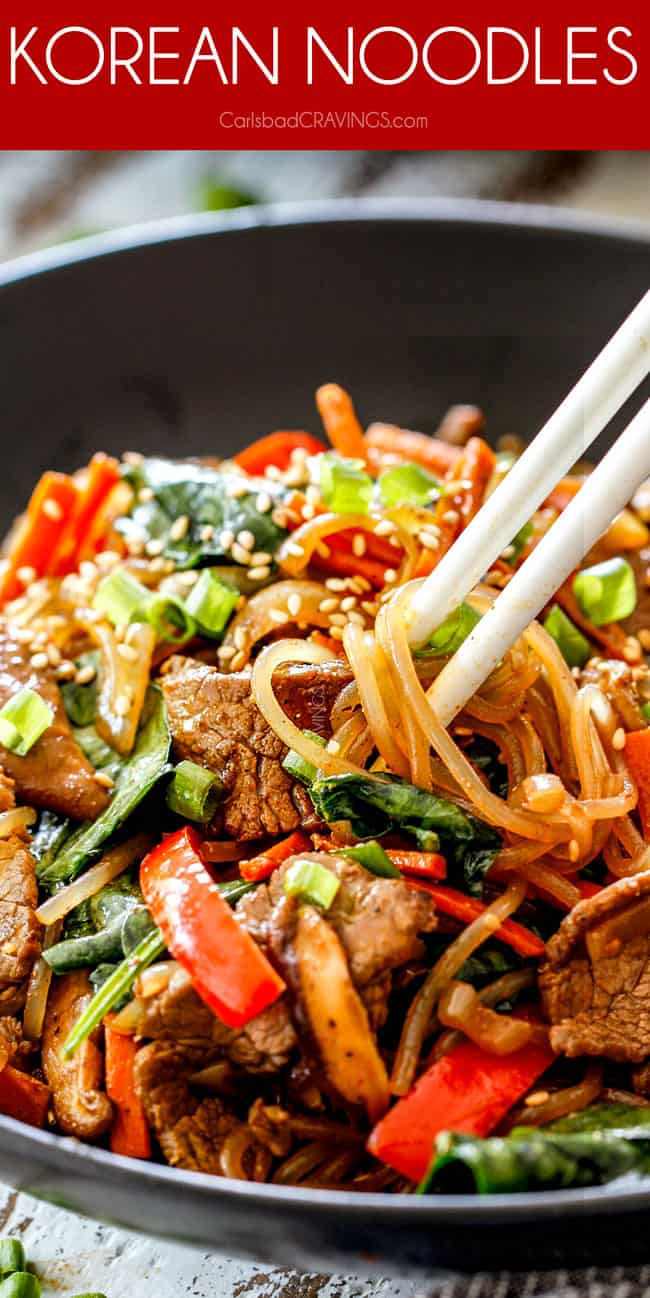 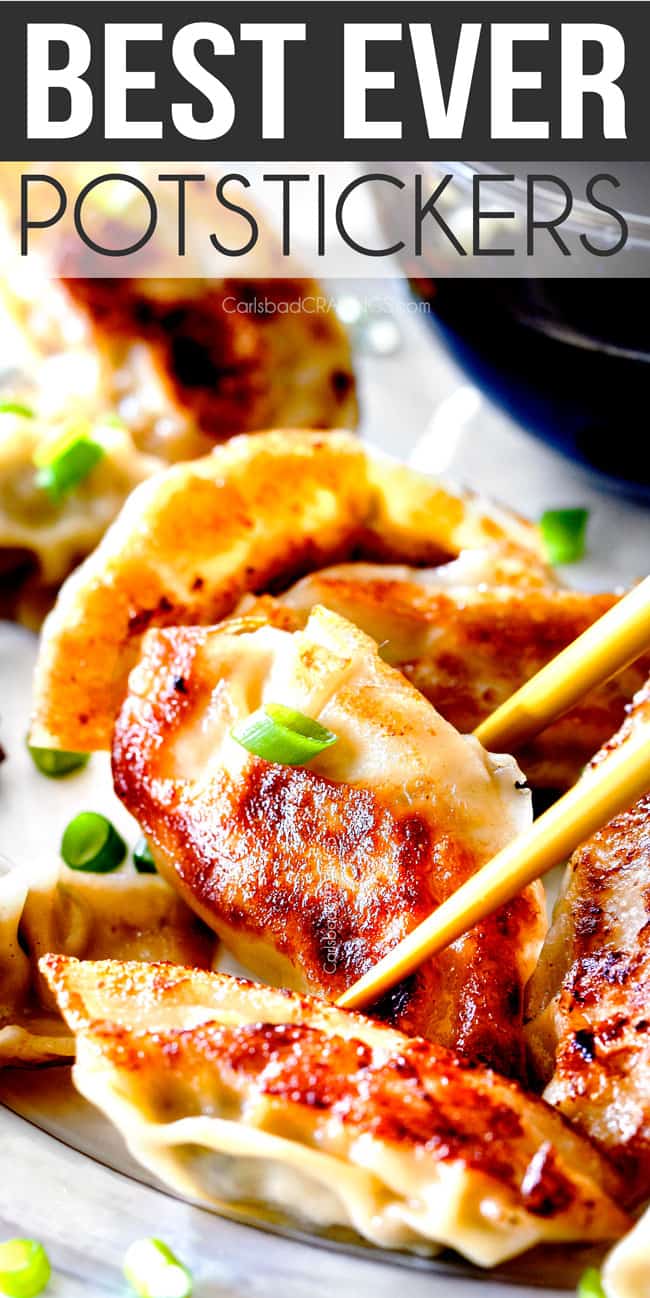 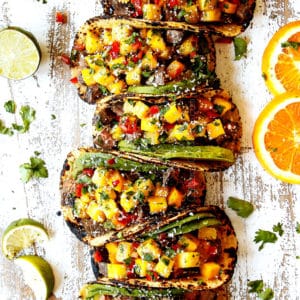 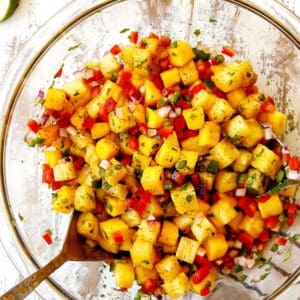 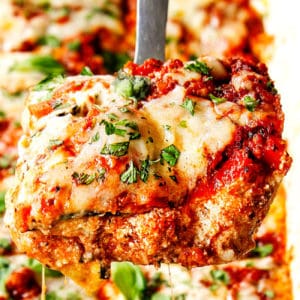