This creamy Chicken Gnocchi Soup tastes way better than Olive Garden and is simple, easy and delicious loaded with pillowy gnocchi, juicy chicken, and aromatic veggies all cooked in one pot!

This easy Olive Garden Chicken Gnocchi Soup is wonderfully rich, and comforting with a fraction of the calories of the original!   Most of the prep time is hands off simmering for an ideal weeknight dinner which makes equally fabulous leftovers – and did I say one pot already? 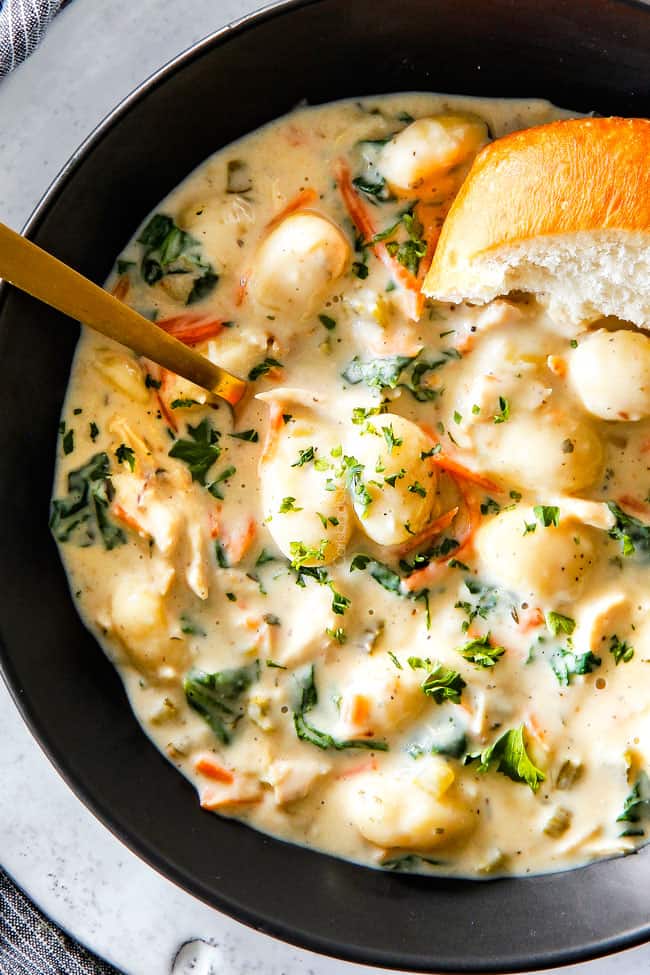 Ever since I posted my (Better than Olive Garden), Zuppa Toscana recipe, I have been itching to make an Olive Garden Chicken Gnocchi Soup Copycat because I knew I could make it lighter while tasting equally delicious – and because gnocchi in soup – yasssss!

This lighter Chicken Gnocchi Soup is one of the most comforting, flavorful soups on the planet.  It’s super hearty but comes together quickly as most of the prep time is hands off waiting while the chicken breasts simmer in the soup until shreddable for extra juicy chicken (and YAY for no chopping raw chicken!).  If you want to make this Chicken Gnocchi Soup uber quickly, then you can also use shredded rotisserie chicken instead of raw chicken breasts and then just simmer the soup until thickened. 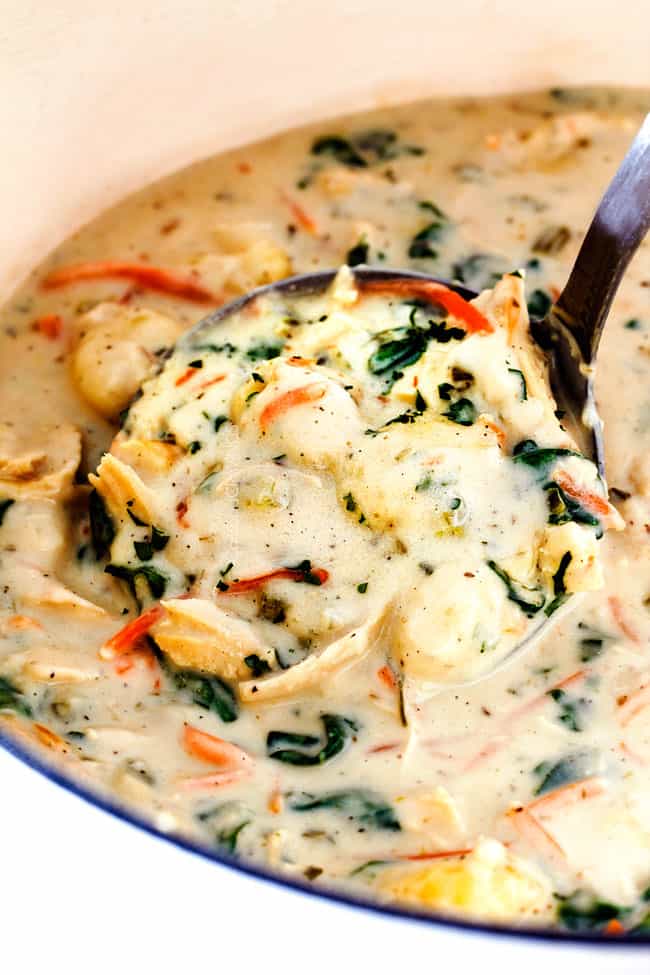 Gnocchi are small dumplings made with a variety of ingredients but for our Chicken Gnocchi Soup, we are going to be using potato gnocchi.  Potato Gnocchi are, in essence, cooked potatoes mashed and combined with flour to create a dough that’s then rolled out and cut into small pieces then pressed with a fork to create ridges to hold sauce/broth.

If you’ve never had the pleasure of devouring gnocchi in soup, you are in for a treat. Gnocchi’s plump, pillowy texture and delicate flavor make them ideal to be smothered in rich, creamy broth. The are a fabulous pasta alternative that transform into melt-in-your-mouth, light, fluffy flavor bombs from cooking directly in the one pot soup. 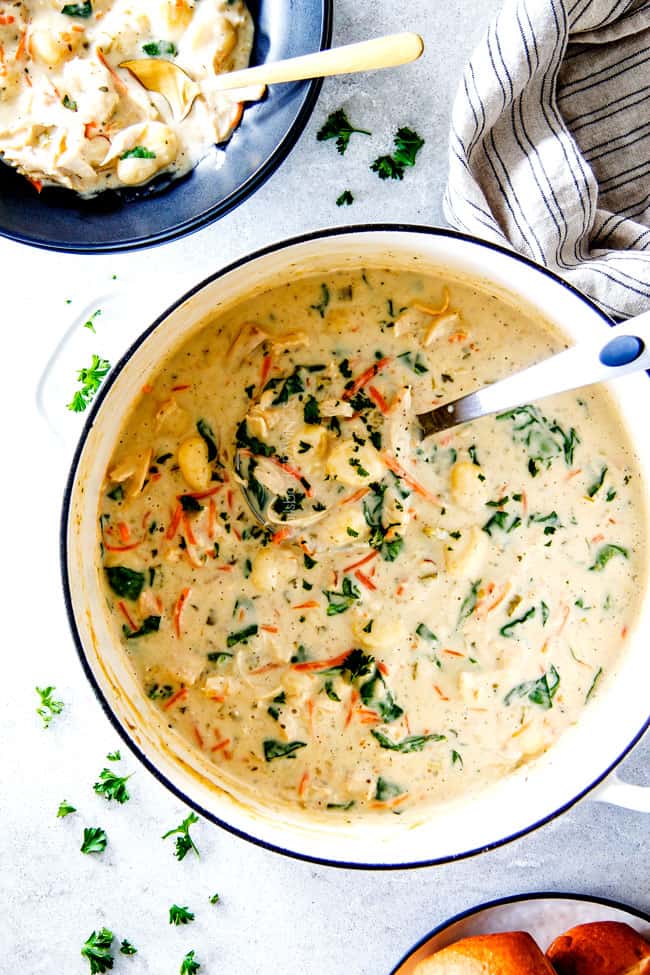 Where Can I find Gnocchi at my grocery store?

Pre-packaged gnocchi can either be found fresh in the refrigerated section, frozen in the freezer section, or dried on the shelve with other pastas.  I recommend fresh gnocchi as my first choice followed by frozen.

If using frozen gnocchi, take care to not thaw them first.  Simply add your frozen gnocchi directly to the soup.  If allowed to thaw first, they will turn into soggy mashed potatoes.

Dried potato gnocchi are the driest of the bunch just as their name implies. Because of this lack of moisture, the dried shelf gnocchi tend to fall apart somewhat and would be my last choice. 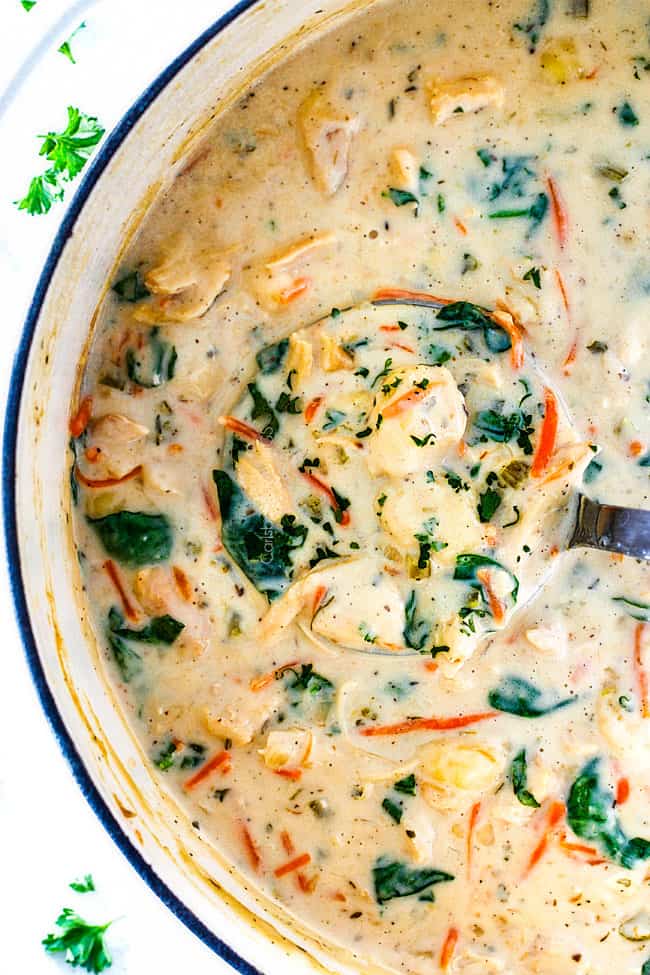 How to Make Chicken Gnocchi Soup (tips and Tricks!) 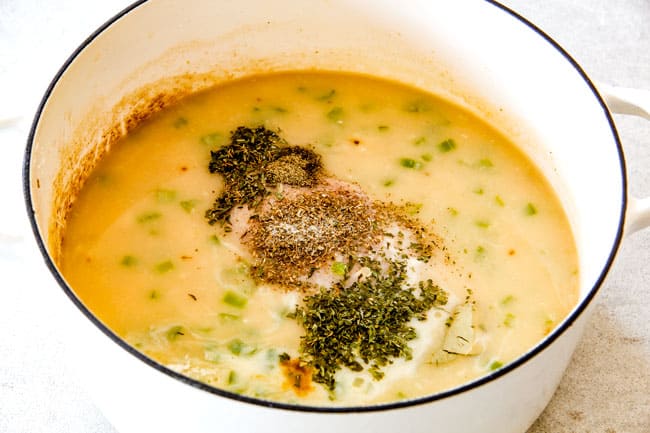 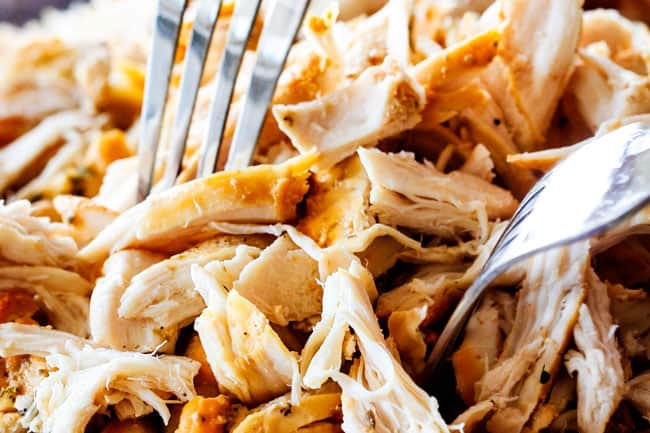 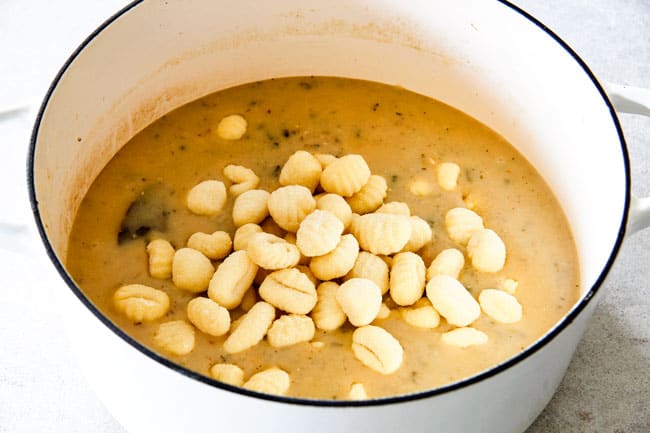 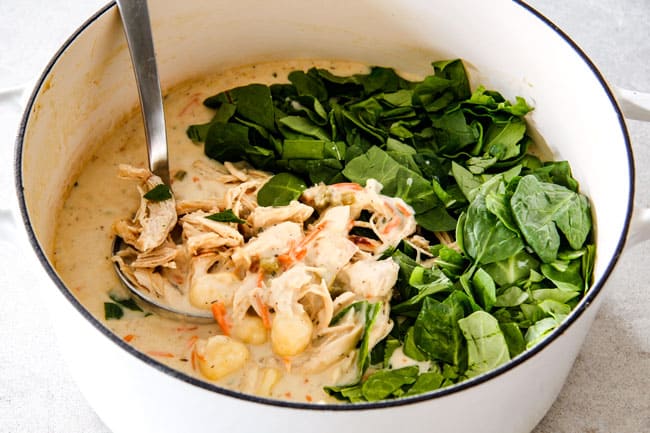 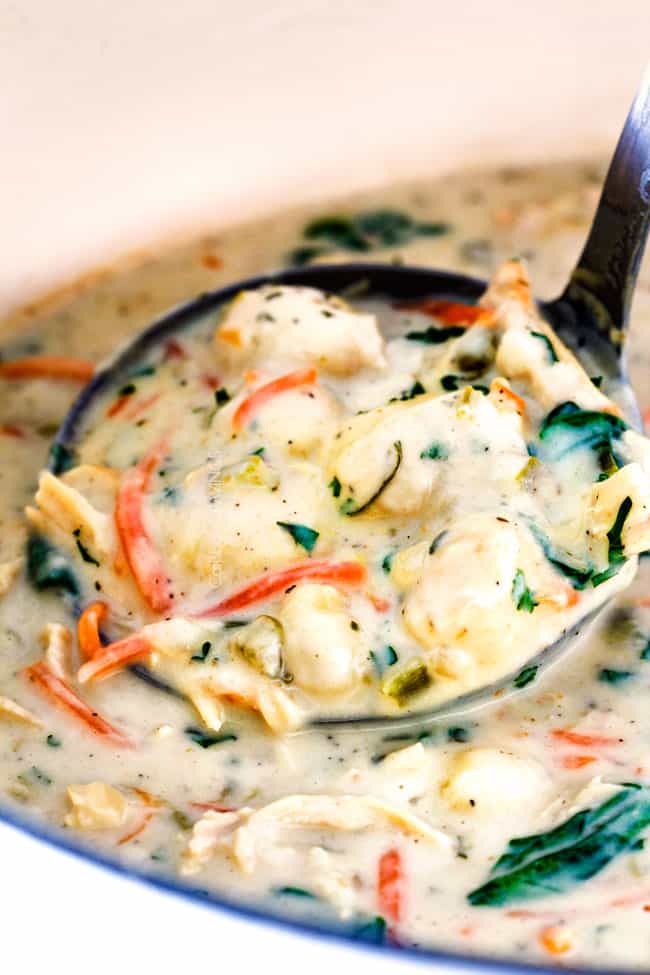 Now sit back and slurp up a big bowl of hearty Chicken Gnocchi Soup with a big chunk of dunkable crusty bread.  Because it’s not quite sandal weather yet.

If you love this Chicken Gnocchi Soup, you will love these Soup Recipes with Pasta!

Pin it to your SOUP, DINNER OR CHICKEN Board to SAVE for later! 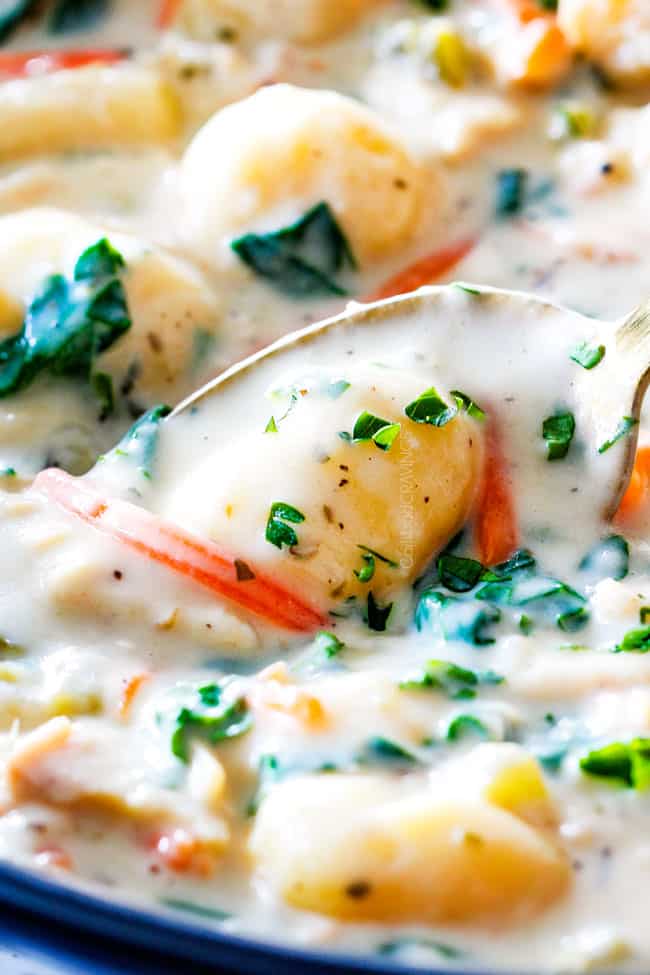 Print Recipe
Chicken Gnocchi Soup
This creamy ONE POT Olive Garden Chicken Gnocchi Soup is simple, easy and delicious loaded with pillowy gnocchi, juicy chicken, aromatic veggies. This easy Chicken Gnocchi Soup is wonderfully rich, and comforting with a fraction of the calories of the original!   Most of the prep time is hands off simmering for an ideal weeknight dinner which makes equally fabulous leftovers - and did I say one pot already? 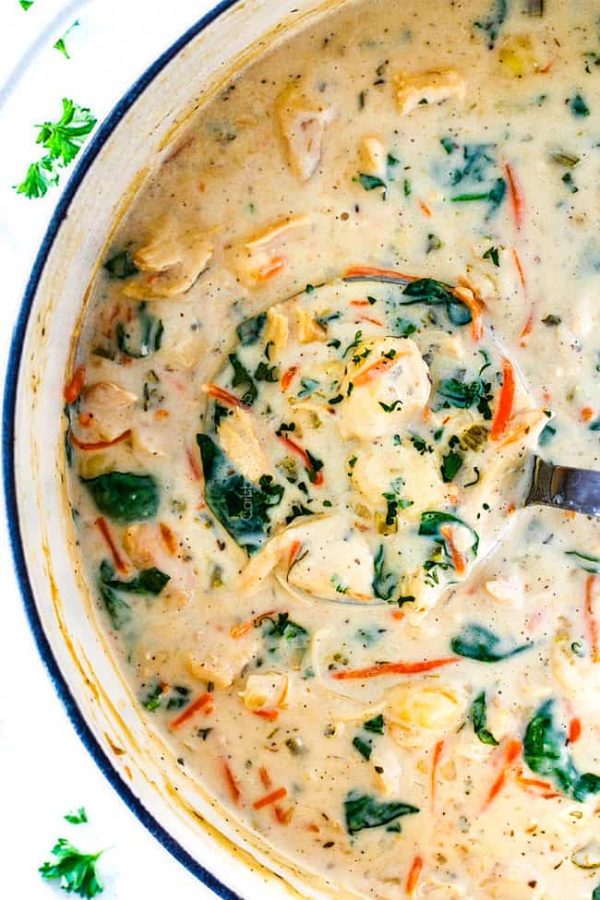 *May substitute 2 1/2 cups shredded rotisserie chicken.  If using shredded chicken, do NOT add chicken to simmering soup, instead add it when the recipe calls for shredded chicken.

**Look for potato gnocchi in the refrigerated or frozen foods section.  If using frozen gnocchi, do NOT thaw before adding to soup.

***May sub chopped or sliced carrots and sauté them with the celery and onion. 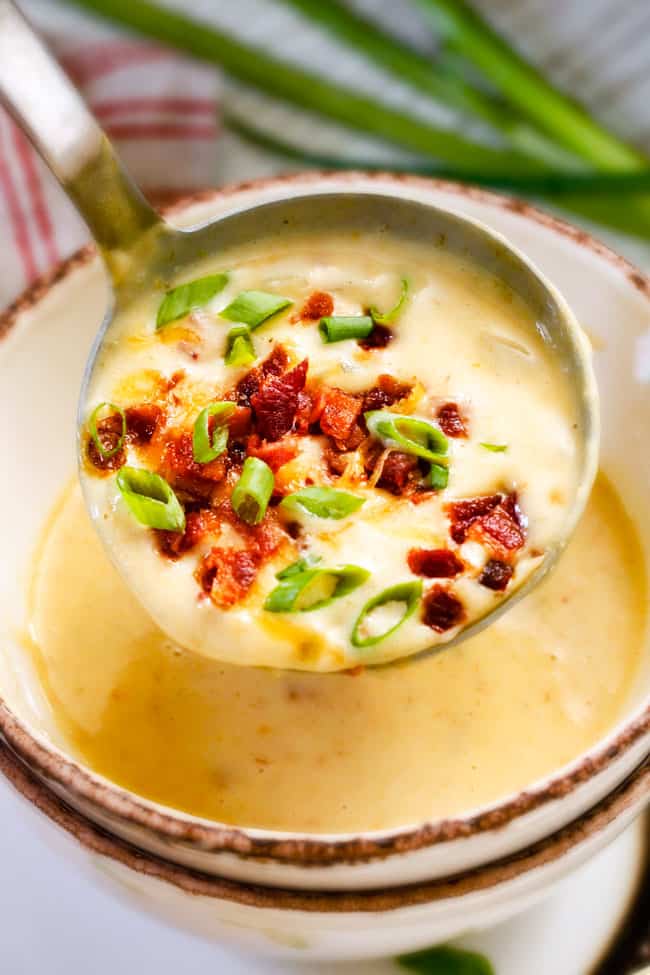 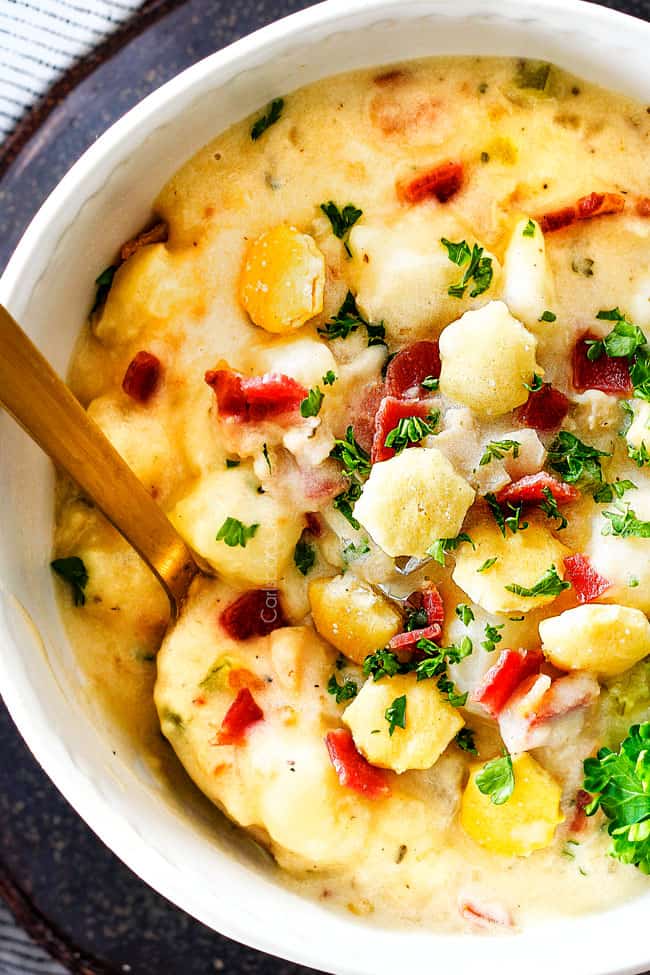 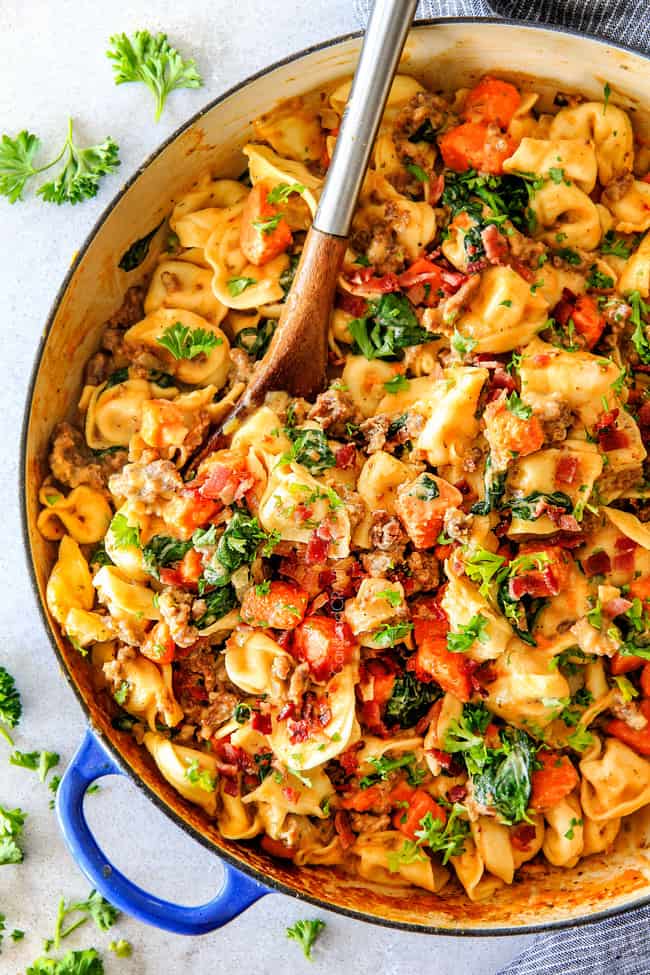 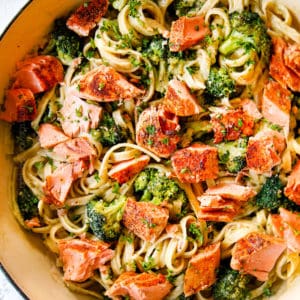 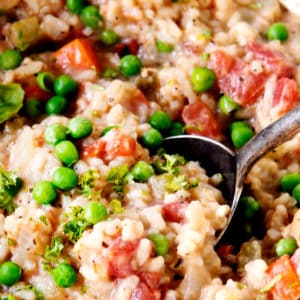 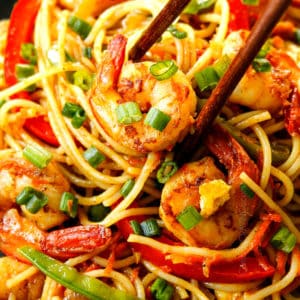 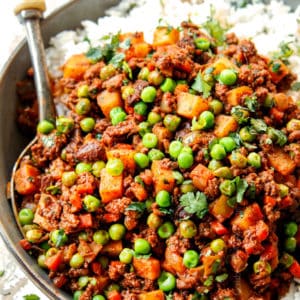