Thai Cucumber Salad Recipe spiked with Red Chili Soy Vinaigrette is flavorful, refreshing, easy and the perfect companion to all your Asian dinners or stand-alone-delicious!

This Thai Cucumber Salad recipe is not only bursting with chilled cucumbers but carrots, bell peppers and red onion for a popping fresh crunch, but the real star is the Red Chili Soy Vinaigrette.  It infuses the Asian Cucumber Salad Recipe with a sweet and savory zing that is simply irresistible! 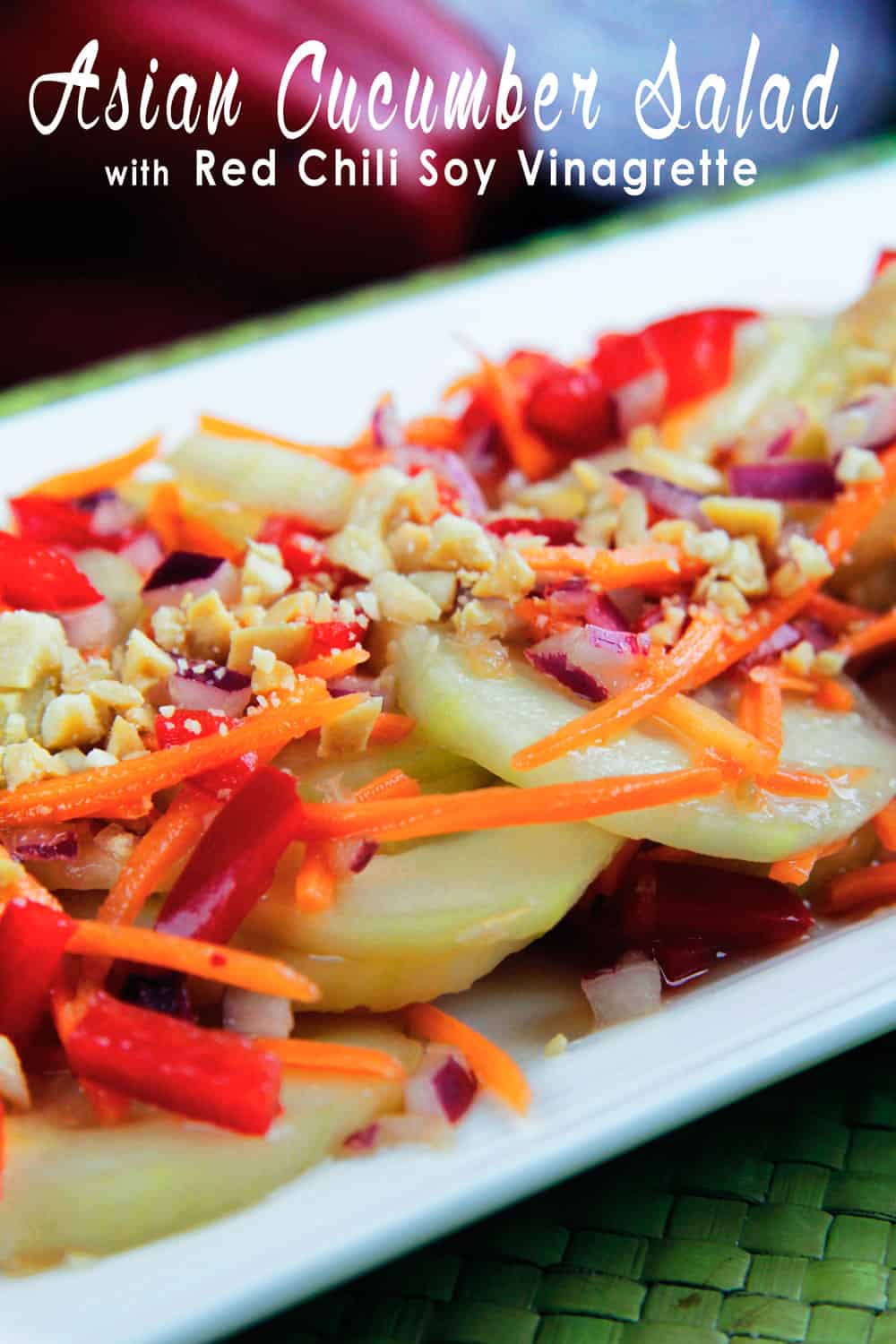 Do you ever get so distracted that you completely miss your exit? or burn the cake in the oven? or peel a cucumber because you think its zucchini? And that is why all these cucumbers are peeled. Which turned out to be a good thing because once I peeled my cucumbers and finally got off the phone to realize that my cucumbers were in fact, not zucchini, I needed to use them right away which means you get this Thai Cucumber Salad Recipe with Red Chili Soy Vinaigrette sooner rather than later!  And I know my dear friend Taralynn has been asking for this recipe – so she would prefer sooner!  And I know you would prefer sooner too because this cucumber salad is so easy, tasty and refreshing, it will probably become your favorite Asian side dish, or simply your favorite salad! 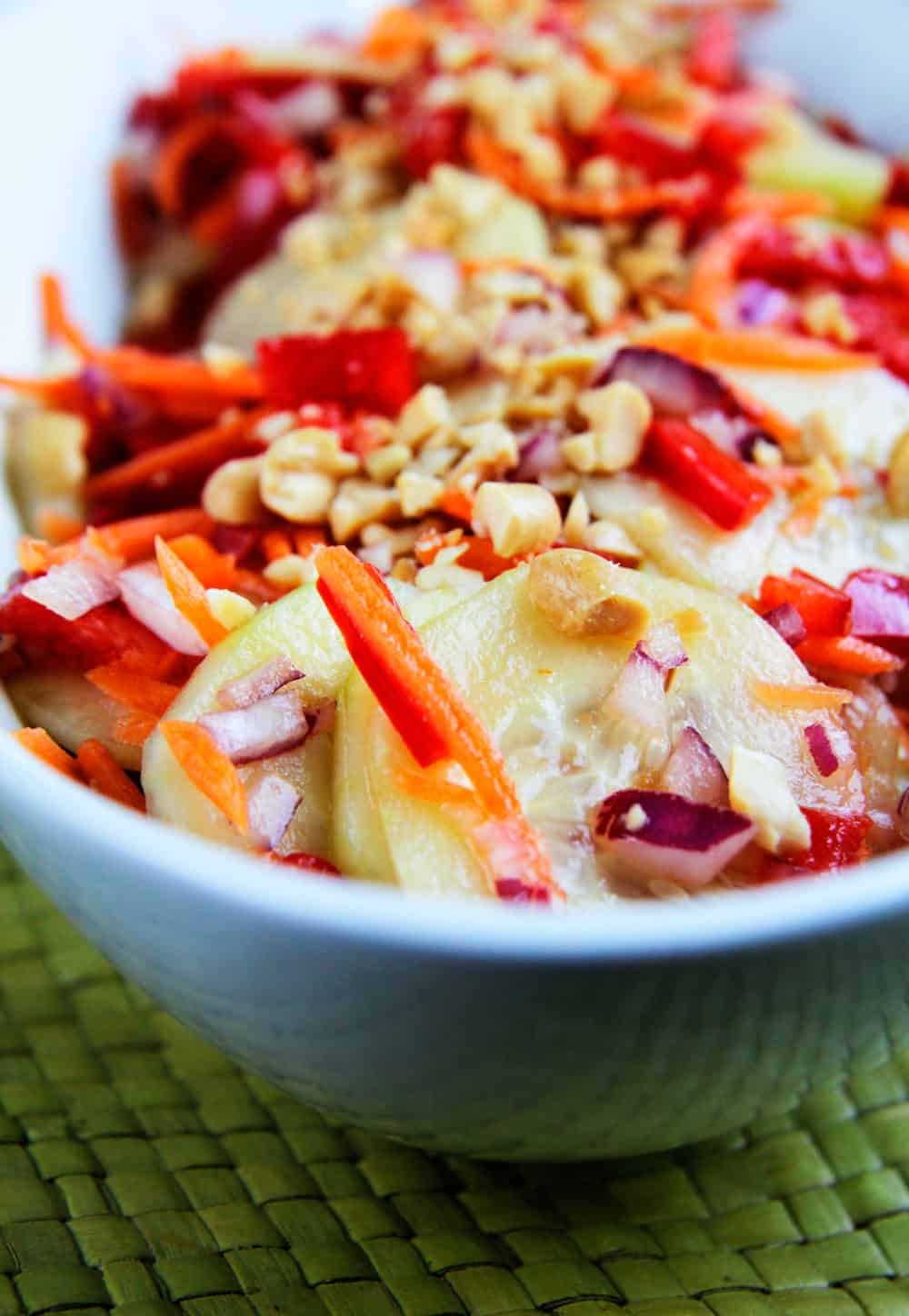 Taralynn first tasted the deliciousness that is this salad a while back when we had her and her husband over for dinner.  I served them my insanely delicious Skinny General Tso’s Chicken aka My Favorite Chicken Ever! – because it is my favorite chicken ever!

She also wanted that recipe. 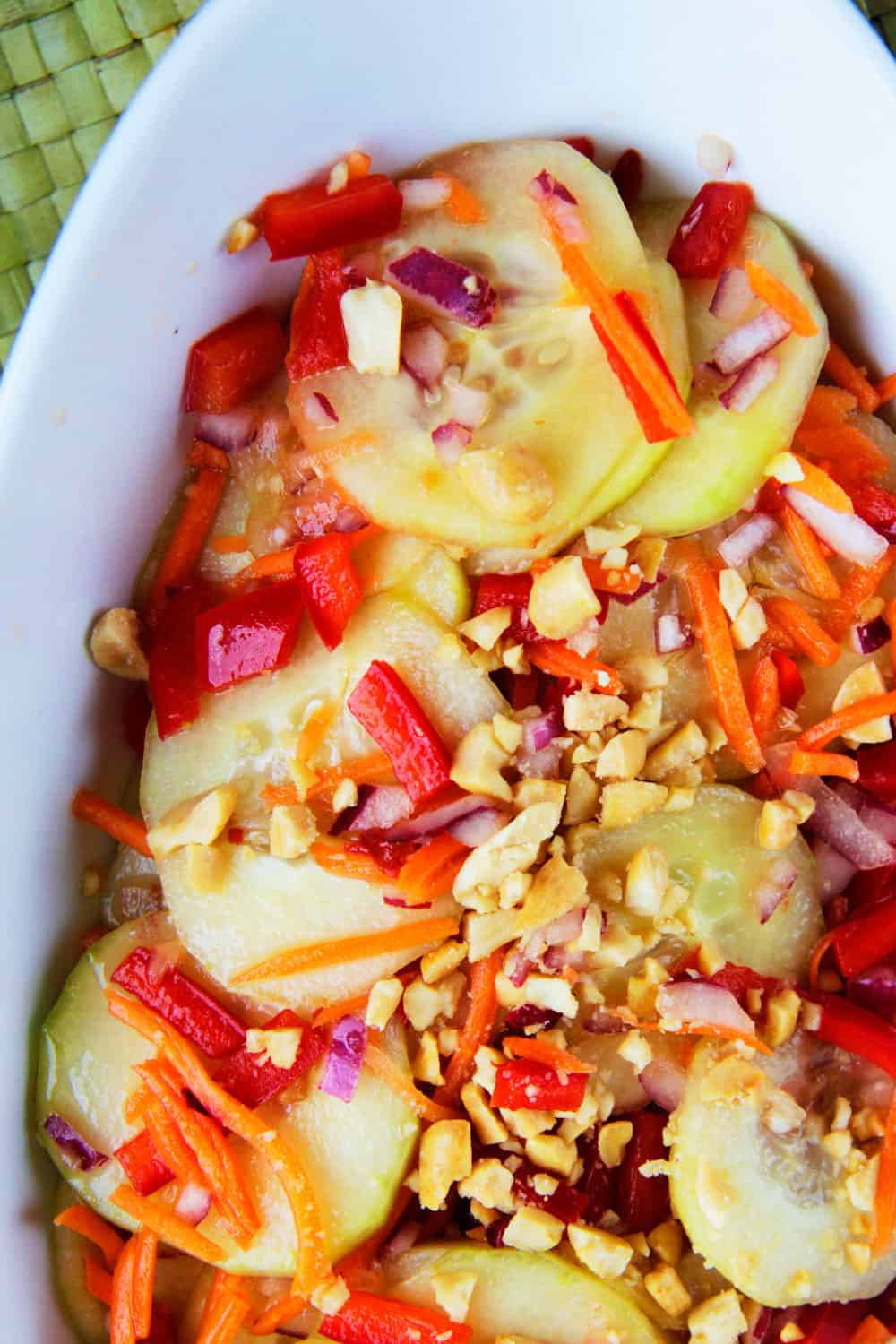 So what do you serve with General Tsos’s Chicken that won’t compete but compliment? but can still stand on its own? 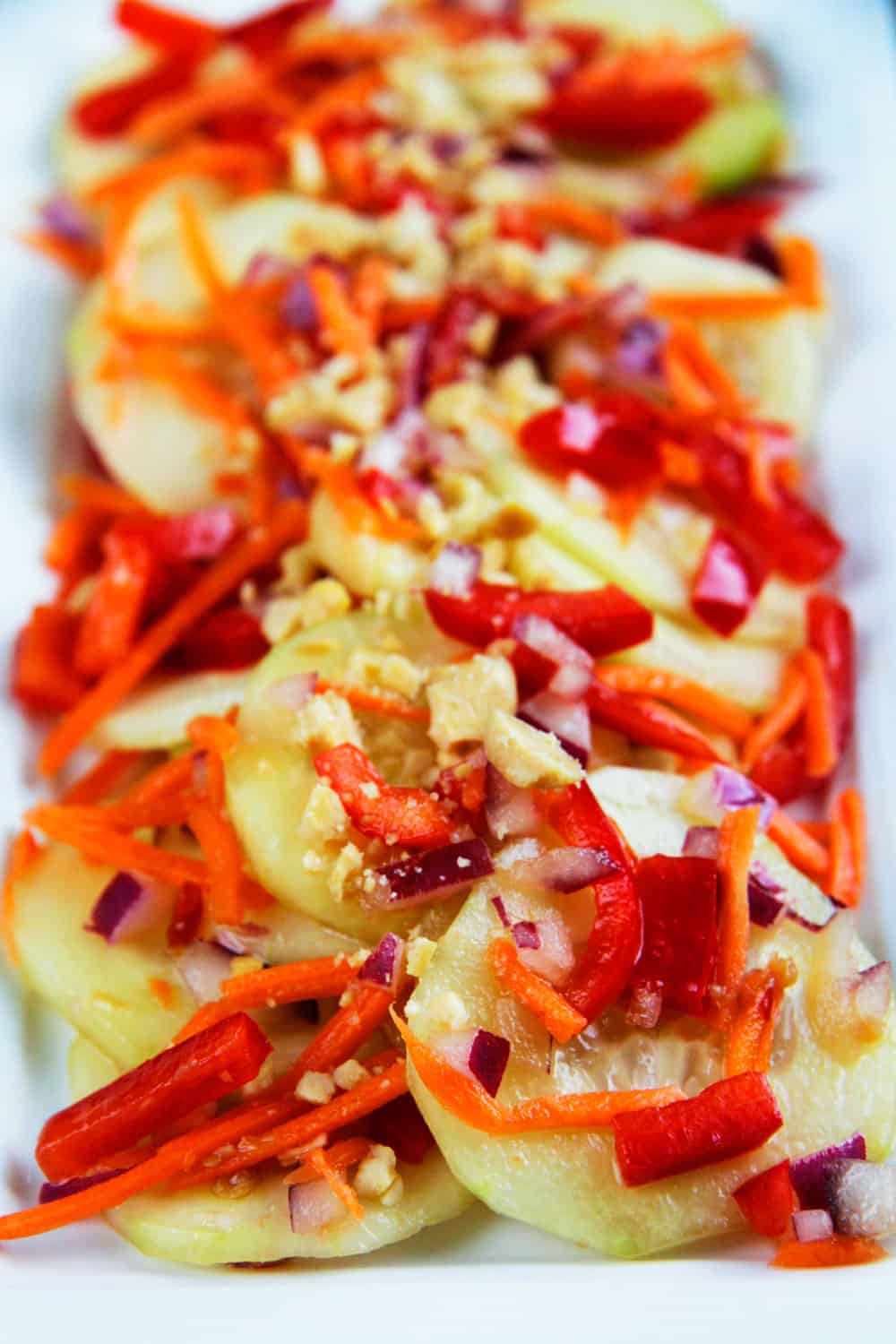 This Thai Cucumber Salad Recipe!  Unlike a lot of salads, this salad is marinaded in a vinaigrette so the dressing/salad is almost zero fat!  A vinaigrette of  Thai Red Chili Sauce, soy sauce, rice vinegar, sesame oil, lime juice, ginger, garlic and a dash of sugar.  Can you taste it now?!

As the cucumber, carrots, bell peppers and red onion slumber in the marinade, they soak up the Asian flavors for a subtly sublime taste and a a not so subtle crunch of thinly sliced cucumbers, matchstick carrots, red bell peppers and peanuts.  This Asian Cucumber Salad Recipe is cold, crisp, refreshing, with a slight zing from the chili sauce. 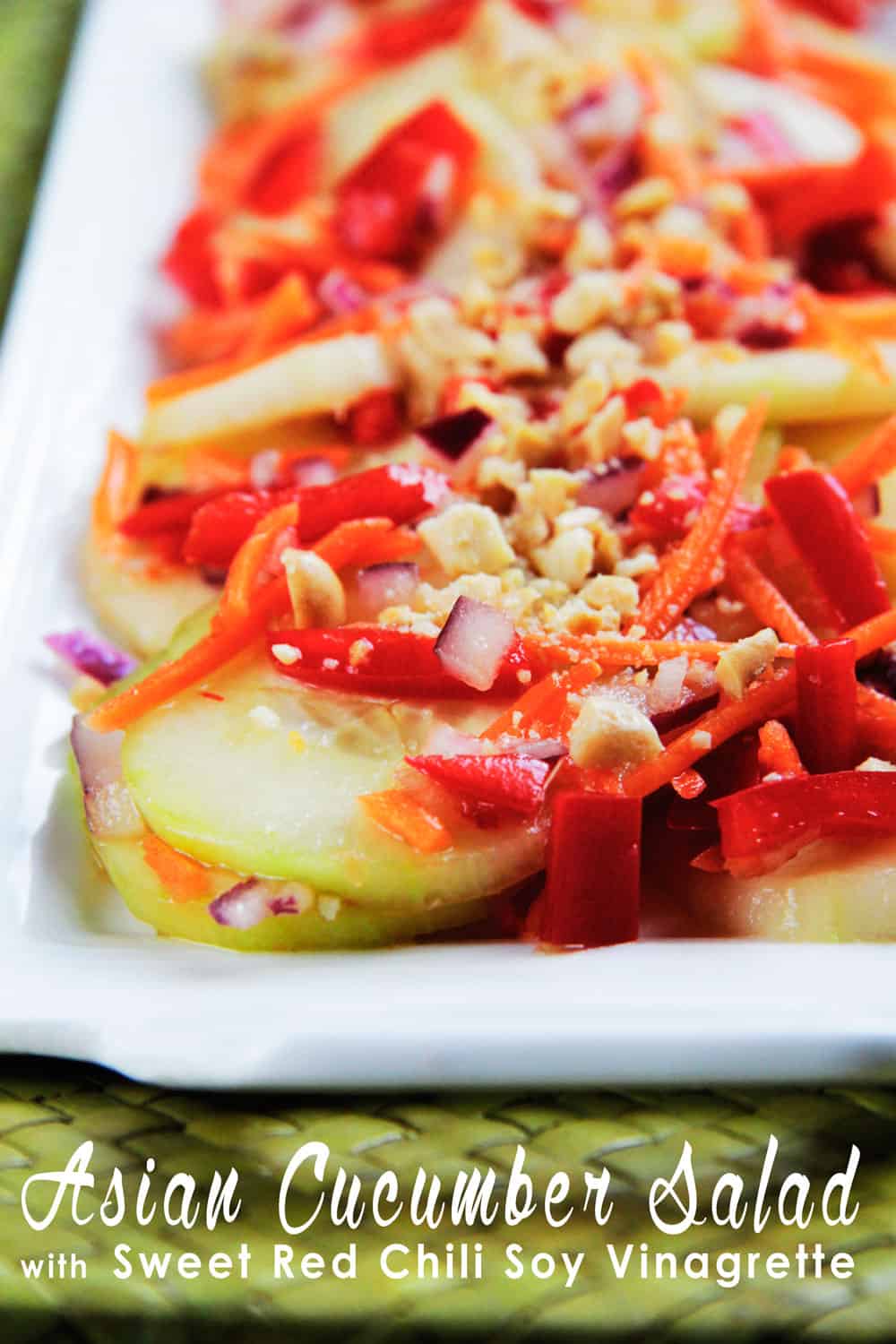 Its a great side dish, or anytime dish.  I actually just love eating it by itself because this Thai Cucumber Salad Recipe can stand on its own!

Pin it to your ASIAN or SALAD BOARD to save for later! 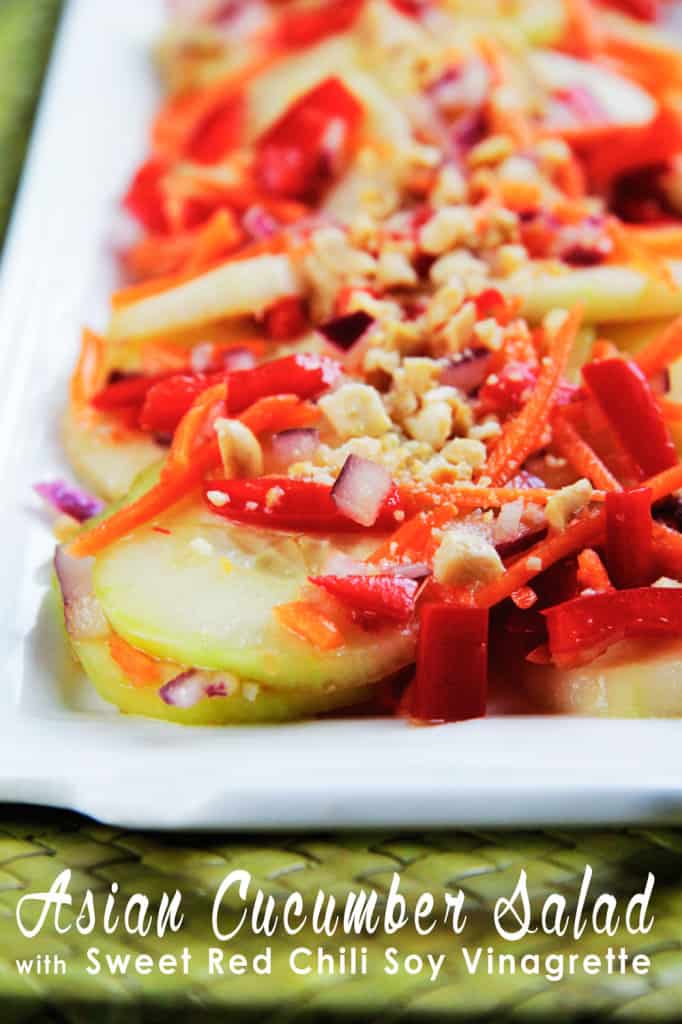 *Can be found in the Asian section of any grocery store - it also makes a great dipping sauce for anything Asian! 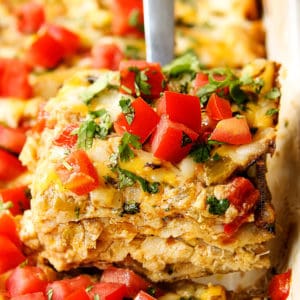 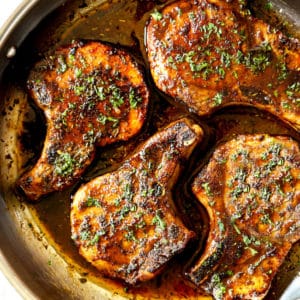 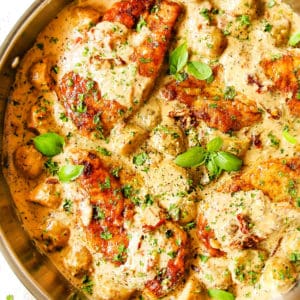